Summer has been wonderful for our family, so far. We kicked off end-of-school-year with our camping/cabin trip back in May. Since hubby had two weeks off from teaching before Upward Bound started at the college, we worked diligently on sorting all five kiddos’ toys and clothing for the year — dropping off donations and picking up whatever items each child needed. And now that temps are well into the 90s (and I did my first lawn watering of the season!!), I’d say we’re well into the festival stage of the summer where our weekends will be seemingly swallowed up in a flurry of local events. But you and I will still have #IMWAYR — whew! Onward…

This book has so much heart and hope, even in the midst of fear. “The thing about prejudice is you can’t tell people not to be prejudiced. You’ve got to show them.” And that’s exactly what this book does. Yang drew from plenty of real-life experiences from her years working the front desk of hotels that her parents managed. In this story, Mia’s mom champions math. However, 10 year old Mia falls in love with English writing. While managing the front desk of the Calivista Motel, she bravely uses writing to make waves in the world around her. Meanwhile, her parents quietly hide immigrants in empty rooms, hoping the motel owner won’t discover their secret. Left and right, conflicts occur between Chinese immigrants and Americans due to a simple misunderstanding of language or customs. Nevertheless, the ending provides a happy “feel good” conclusion that feeds on the love of a uniquely bonded community. Ahhhh… this book pulls the heartstrings!

A few interesting tidbits about Kelly Yang: She started college at the age of 13. She also started the Kelly Yang Project which is a writing and debating program for children in Asia and the United States. She has been published in the New York Times, the Washington Post, and the Atlantic. So while this is her debut middle grade novel, writing professionally is not new to Yang. Her literary experience is quite evident in the pages of Front Desk. I couldn’t put it down — started and finished it in the same day (even while being the only parent home with 5 very busy children). Grab this one as soon as you can!

I was finally able to pick this little book up. Since book #2 (The Wild Robot Escapes) was recently released, I was feeling a bit behind. So… Roz is a robot. During a hurricane, her ship sinks near an island devoid of human life. Roz is the only robot to “survive.” From the beginning, the other island being call her monster. But chapter after chapter, Roz slowly adapts to island life, learning the various animal languages, befriending the island animal families, and figuring out her role in this new habitat. Themes revolve around acceptance of differences (some bullying included), adoption, community, and adaptation. Brown also includes a number of simple black and white illustrations throughout the chapters that add personality and humor to each situation.

I don’t think I can liken this book to any other novel I’ve read (at least not in recent years). While marketed to middle graders, the language has the feeling of a young child’s picture book. I could read each chapter to my 4-year-old and she’d easily be engaged and empathize with Roz and the various animal families. For that reason, it would probably make a good read-aloud for a multi-age classroom or home environment.

Example from the text: 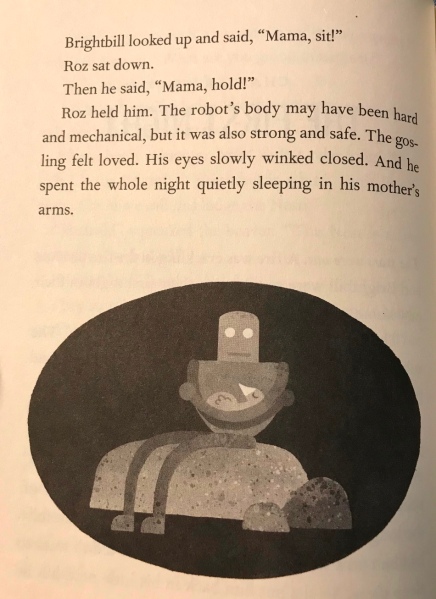 I have book #2, The Wild Robot Escapes, checked out from the library and hope to squeeze it into my “short list” summer reading plans. 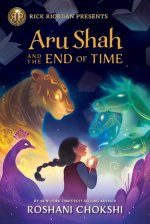 This is the first book in the new series by Chokshi. Aru Shah lives in a museum with her single mother, Dr. Krithika Shah. Aru is a liar. She lies about everything ranging from where she gets her clothing to her grades to where she vacations. She does this because she never feels good enough at her fancy private school. One day, over school break, her classmates trap her in a lie and she feels forced to prove herself. She lights the mythical Lamp of Bharata, intending to blow it out right away. But as soon as the flame touches it: BOOM! It’s too late. She’s whisked away on a mission she never expected, with a pigeon named Boo as her “enchanted assistant” (AKA guide).

This book is making big waves in kidlit reading circles and seems to be loved by many reviewers. So I hope I don’t deter anyone from reading it by sharing that I really struggled to get into the story. I don’t know if the hype got to me and maybe that’s part of why it dragged, but after the first 50ish pages I already began to lose interest. That’s when I put down the book and started the audiobook. Then I went back and forth between reading and listening until the end. It will likely be enjoyed by middle graders who enjoy a continuous flow of adolescent humor and sarcasm. But it just didn’t work well for me. Other reviewers say it picks up around the 80% point, and I would probably agree. There are some important reveals and shifts that help tie things together in the end. I’m not certain that I’ll read book #2 when it’s released. Sometimes the second book in a series is much better. It will be a wait and see decision for me. 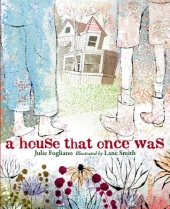 The House That Once Was
Julie Fogliano
Lane Smith, Illustrator
May 1, 2018

Two children find an old, abandoned house and begin walking through it, attempting to figure out who used to live there and why they left. They find old toys, discarded books, and pictures of who may have been the inhabitants. It’s both a sweet and somber picture book that includes a great deal of imagination. My daughter picked this one up for me from our local public library. She and I immediately opened it and began pouring over the beautiful illustrations. There’s such variation in the artwork and we immediately turned to the back to read about how the artwork was created. In the present day artwork, Smith used India ink drawn on vellum with a crow quill pen. Then while still wet, he pressed it onto watercolor paper creating a blotted effect. For the imagined scenes, he used oil paint on hot press board and combined that digitally with paper collage elements. I can totally see why it’s already making Mock Caldecott lists.

Here are examples of the two different types of artwork: 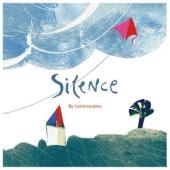 This is another picture book gem my daughter grabbed at the library, this week. It’s a little older than the books I normally share on #imwayr, but it’s pretty and meaningful. In a nutshell, the text is a free-verse poem on mindfulness — it allows the reader to slow down and listen to the world around them. Young children might be asked to look at each new spread and anticipate what the new sounds will be on each page. At the same time, this would make a very nice bedtime book to unwind at the end of a busy day!

I had never heard of Lemniscates before seeing this book. In the back of the book there’s a notation that says, “Lemniscates is an illustration studio of artists and designers located in Barcelona. Their creative and imaginative books spark curiosity in children of all ages, and encourage children to develop their unique talents and skills for a deeper understanding of themselves and the world around them.”

Here are a couple page spreads for your enjoyment: 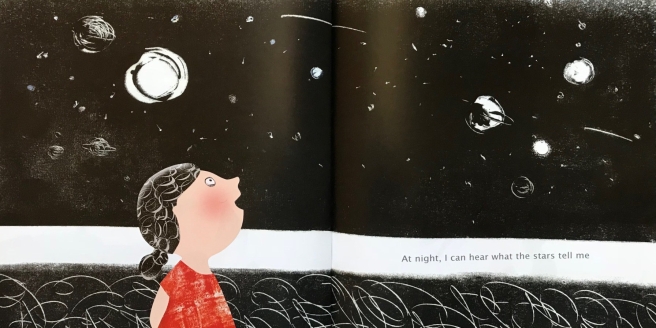 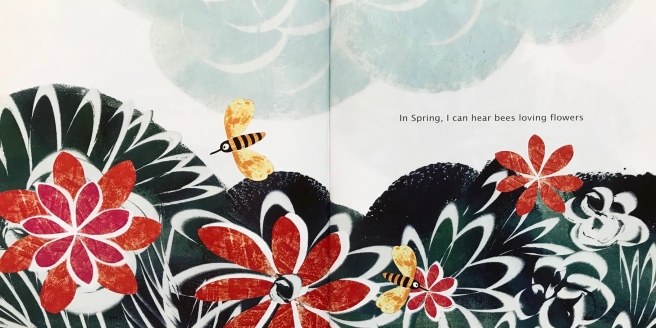 I’m still overwhelmed with summer kid/family stuff. But I’m going to commit to the Book By Book: BIG BOOK SUMMER CHALLENGE and start on one of my “big books” that has been sitting on my shelf for a months. Sue has set up information and a link-up HERE and she’s also hosting a Goodreads “big book” summer group HERE. It would be so fun if some from our #imwayr group were to join in. To qualify as a big book, it just needs to be over 400 pages. It can be a book that you slowly savor over the whole summer or if you have a lot of free time to yourself this summer, you can commit to a whole pile of big books. I plan to start An Ember in the Ashes by Sabaa Tahir this week. If I really enjoy it and finish it early in the summer, then I might plan to work through that series since they’re all big books. Even though I’m normally a one-book-at-a-time gal, I might try to squeeze in something else so I can enjoy some middle grade reading simultaneously.

Have a wonderful reading week, friends!